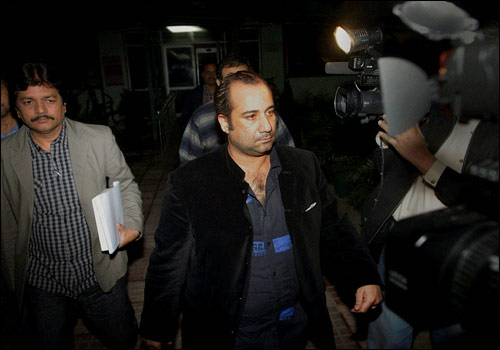 Rahat Fateh Ali Khan was arrested in the India at the New Delhi airport on Feb 13 for violating Indian currency act, because he was carrying more than 0.1 m  dollars without notifying the Indian officials.

Talking to journalists here at Islamabad Airport on arrival singer Rahat Fateh Ali Khan said that he had to face a lot of difficulties in India as he was unaware of Custom laws but he would revisit India if they would invite him again with honor.

He further said that Indian Custom Officials have seized the amount recovered from him while he has to pay fine of Indian Rs 3 million but inspite of this he lauded the behavior of Indian officials.

Answering to question of being targeted like Adnan Sami Khan he replied “no there is difference between both issues while I gain respect in India and also in Pakistan”.
He said that if India would invite him again then he would like to visit India again. It is relevant to mention here that Indian officials investigated from 14 persons in this regard.

He thanked Interior Minister Rehman Malik for his cooperation.